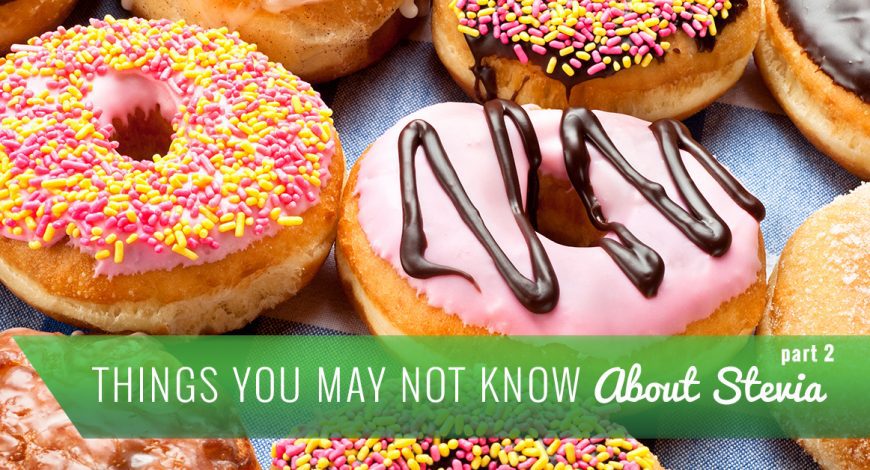 Things You May Not Know About Stevia Pt. 2

Stevia Has Some Interesting Characteristics

When it comes to being healthy, people do not always make the best choices. Sure, everyone talks about eating better and working out more but, if we are all being honest with ourselves, those two things are not always the easiest thing to do. Eating better, in particular, can be difficult for many people because, let’s face it, when tempted with things that we shouldn’t eat, many people’s willpower is simply not strong enough. It’s easy to say that you aren’t going to eat a doughnut; it’s harder to say that you aren’t going to eat a doughnut when it’s sitting right in front of you. Recognizing this weakness in the human constitution, companies around the world have attempted to develop effective sugar substitutes so that people are able to enjoy foods that, if they were loaded with sugar, may not be the healthiest choice. Here at SoPure Stevia, we believe that our products are the most effective sugar substitutes available in terms of both quality and taste. In today’s post, we are going to go over a few more facts that some of our newer readers may not know about stevia. We hope that by the end of this post you have a solid understanding of why we feel that our products are superior to other alternative sweetening methods.

While sugar is one of the most famous substances on Earth, it is also one of the most dangerous. Sugar has in one way or another been consumed by humans for thousands of years, however, in the last century sugar has taken on a role that it was never meant to fill. While sugars ingested through natural means, such as fruits, are part of a healthy and balanced diet, society has taken sugar to an entirely new level. When you take the time to look at the nutritional information of the food you ingest, you will quickly see that sugar is added to nearly everything, even food items that you may not have suspected to contain any sugar. As a result of this overabundance of sugar, people are starting to look for a healthy way to sweeten items. Stevia has gained great popularity in the recent years for its sweetening power, quality, and taste. While all of these traits are pretty well known at this point, below we have listed a few more stevia facts that you may not be aware of.

Stevia is Calorie Free, but be Careful

One of the most well known facts in relation to stevia is the fact that it is calorically neutral. This means that no matter how much stevia a person ingests, they will never gain weight from it because it passes through the body completely. While this is definitely a bonus to this sugar substitute, it has also caused somewhat of an issue in relation to those seeking to lose weight. While it is true that eliminating sugar as much as possible from your diet is a great way to start losing weight, people should not assume that this one lifestyle change will result in rapid weight loss. Even if a person replaces every gram of sugar in their diet with stevia, they will not see much of an effect on their weight if they don’t make additional changes to coincide with their stevia usage. If you want to use stevia to help lose weight, we also suggest that you modify your overall caloric intake.

Stevia Comes in Many Forms

Unlike many other sugar substitutes, stevia comes in a variety of forms. At SoPure Stevia, we offer stevia extracts in liquid, powdered, and granulated forms. We offer these varieties of stevia extracts because each form offers different benefits in relation to the application that it is being used in. Liquid stevia is great for sweetening beverages but is not always the best choice when using it as a substitute in a baking recipe due to the loss of volume in the recipe that is lost when the sugar is not used.

We hope that this short blog series has imparted some information in relation to stevia and that all of our readers learned something that they did not know about this wonderful sugar substitute. To learn more about our stevia extracts, please visit our website today.