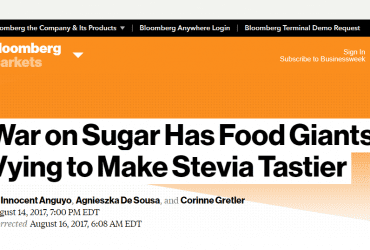 Demand for Stevia Has Grown 3X Since 2011 This recent article from Bloomberg chronicles how sales of stevia has soared into a $4 billion global industry over the past decade. Food and beverage companies such as Coca Cola, Heinz, Nestle, and many more are increasingly turning to stevia as a sugar alternative and the zero-calorie natural...